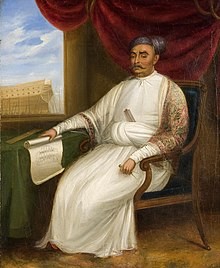 A ship’s plan can be seen in one hand, a pair of dividers in another. In the cummerbund is probably the Silver Scale granted by the EIC. This portrait should actually be for a person who is equivalent to a Chief Naval Architect today. He is the man who built ships of very good quality with Indian teakwood. So much so, that England’s shipbuilders felt threatened. His name is Jamsetji Bomanji Wadia (1754-1821), Master Builder at Bombay Dockyard.

However the Bombay Gazette of 1839 said this:- We doubt the competency of a native, however able or educated to take charge of an establishment such as the Bombay Steam Factory, with a body of English workmen to be directed, superintended and controlled by a native”. Though Ardeshir Cursetjee had been appointed Chief Engineer by the East India Company. It actually marked 105 years of the Wadia family behind Master Builders in Mumbai’s shipbuilding industry. The Bombay Gazette though, believed racism came first.

Jamsetji was a great Indian shipbuilder and was the master builder at Bombay Dockyard from 1792 to 1821, a post he shared with his cousin Framji Manackjee until the latter’s death in 1804. Although their work had been praised by successive British commanders-in-chief in India, from Admiral Sir Edward Hughes in 1781 onwards, the seal was set on Jamsetjee Bomanjee’s work when he laid down the ‘Minden’. This was the first ship of the line to be built for the Royal Navy out of England.
Like all the Bombay ships she was built of teak and very strong and durable. On her delivery to England, their Lordships of the Admiralty sent Bomanjee a letter of appreciation and a piece of plate.
The Wadia (‘shipbuilder’) family had established itself in Surat for many centuries. Surat was a very important seaport on the west coast of India where the British East India Company was first established. The Portuguese, Dutch, French and British maintained trading centres in the city from the 15th century onwards. Since all trade was done by sea, the shipping industry started to flourish. The foreign traders knew Lovji Nusserwanji Wadia for the high standards he maintained for shipbuilding workmanship. The British East India Company secured the services of Lovji for building docks and ships in Bombay in 1736. The Bombay drydock, the first dry dock in Asia, was built by Lovji and his brother Sorabji in 1750. Bombay began to be considered a viable trading port for all ships from the West and East. Lovji has rightly been called the founder of the shipping industry in Bombay, passing away in 1774. His sons Maneckji and Bomanji built on his reputation of integrity, industry and ability. A branch of the Wadias stayed on in Surat and continued to develop the shipping industry and became leaders in the building and construction of bridges, dams and buildings. Between the 1840s and 1940s, the shipping and building industry in Surat was dominated by Cowasji, Burjorji, Behramji, Rustomji, Hormuzji, Nusserwanji and Pestonji Wadia.
The one ship that the Wadias built and of most historic significance for Parsis is the H.M.S. Minden. The HMS Minden was the handy work of Jamshedji who received the contract from the company in 1801. It took him ten years to complete the construction of the ship which set off for the maiden sail on 8 February 1811. 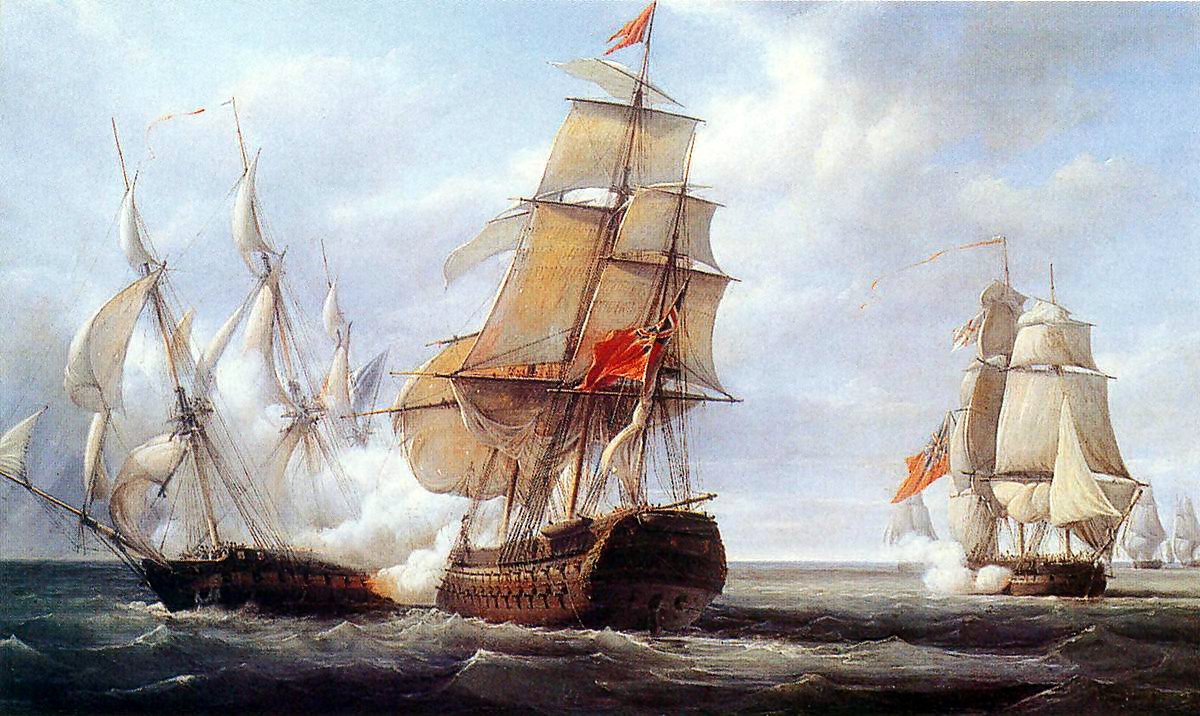 “On Tuesday last His Majesty’s Ship, the “Minden” built in the new docks (Bombay) by Jamshedji Bomanji Wadia was floated into the stream at high water, after the usual ceremony of breaking the bottle had been performed by the Honorable Governor Jonathan Duncan.

In having produced the “Minden”, Bombay is entitled to the distinguished praise of providing the first and only British ship of the line built out of the limits of their Mother Country; and in the opinion of very competent judges, the “Minden”, for the beauty of construction and strength of the frame, may stand in competition with any man-o-war that has come out of the most celebrated Dockyards of Great Britain. For the skill of its architects, for the superiority of its timber, and for the excellence of its docks, Bombay then could claim a distinguished place among naval arsenals”.

A year after her maiden sail, the War of 1812 broke off between the United States of America and the United Kingdom over issues ranging from trade restrictions, forceful induction of 10,000 American merchant sailors into the Royal Navy and British assistance to Native Americans to fight the settlers etc.

Georgetown-based Francis Scott Key who was a lawyer by profession and an amateur poet was asked to accompany the British Prisoner Exchange Agent Colonel John Stuart Skinner onboard the HMS Minden to negotiate the release of prisoners, this after the infamous burning of Washington. The negotiation was a failure but they were not allowed to leave the ship as they knew about the British intention to attack Baltimore.

“At the dawn’s early light” amidst the “rockets’ red glare”, Key saw the American flag still flying high over Fort McHenry which inspired him to hurriedly scribble on an envelope a poem aboard the enemy ship after he saw the storm flag in the fort replaced by a large American flag – the Star-Spangled Banner – flying triumphantly, representing the American victory after the overnight bombardment.

This patriotic poem The Star Spangled Banner was adopted as the American national anthem in 1916 more than a century after it was first published. Almost all Americans know that their National Anthem “The Star-Spangled Banner” was written by the 35-year-old amateur poet Francis Scott Key onboard a British ship as the Royal Navy bombarded the Baltimore Harbor during the War of 1812. But only a very few know that the American anthem was written inside a Made in India enemy ship.
According to a publication in 1955 of The Bombay Dockyard and the Wadia Master, the ship HMS Trincomalee was built by a nephew of Lovji – Jamshedji Bamanji Wadia and launched on October 12, 1817, for the British Navy. Later the ship was named Foudroyant (1897). It served the British well during the Crimean War (1852-1857) and World War II (1939-1945) and now rests in Britain, soon to be converted into a museum. Jamshedji, Nowroji, and Dhanjibhai Wadia have been outstanding shipbuilders of 19th century British India, building 22 ships for the British Navy alone. Like the HMS Trincomalee, the HMS Cornwallis, launched on May 2, 1813, saw active battle in the British-American War of 1812 and twenty years later as Flagship of the British Fleet in the China Seas, she led an expeditionary force during the “Opium War” of China. The historic signing of the Treaty of Nanking, ceding Hong Kong to the British took place on HMS Cornwallis on August 29, 1842. Several other warships like the HMS Asia saw action in various parts of the world.
Seven generations of Wadia master-shipbuilders have constructed ships in Bombay that have plied the seven seas from the shores of the New World to the ancient shores of the China Seas. Many ships were built for the Indian and British Navy. When their connection with the Bombay Dockyard ended in 1913, the Lovji Wadia family had left a legacy of ships, from sloops to schooners, merchant ships and man-o-wars, cutters and clippers, frigates, water boats and steamships – over 400 ships!
Real master builders. We should be proud of this heritage.
@ Yeshwant Marathe
yeshwant.marathe@gmail.com

Very interesting information. I appreciate your effort to gather the information and put it in a most readable manner.

“But only a very few know that the American anthem was written inside a Made in India enemy ship.”
Very interesting piece of history , indeed.
It shows the research done by you to pen this blog. Very impressive.