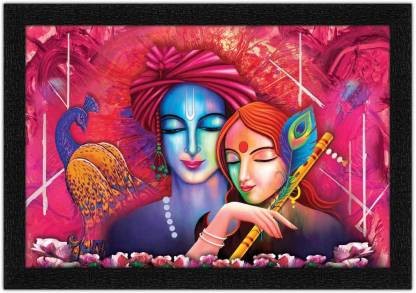 Where does Radha stands in Krishna’s Life is a very debatable question. Krishna’s critics have even futilely tried to vilify him by giving a perverted form to the stories of Radha-Krishna.

Who is this Radha whose name has been associated with ‘Shyam’ or ‘Krishna’ as ‘Radhe-Shyam’ or ‘Radhe-Krishna’? Some illustrate her as a sister, while others describe her as Krishna’s wife by marriage. Yet others state that Radha was married to someone else, but even then, she was having sensuous relations with Krishna and had attained the acme by loving Krishna through her servitude. So, chequered descriptions/depictions of her were made by various people as per their understanding and attitude. Radha has been placed at such a high level on the scale of devotion that it seems that Radha and Krishna are inseparable. One cannot even imagine the existence of Krishna sans Radha. But the most surprising thing is that there is no passing reference to any individual named ‘Radha’ in any of the endorsed scriptures that depict the Life of Krishna. The most ratified and accepted book describing the various minute nuances of Krishna’s character is the ‘Harivansh.’ There is no mention of the name Radha in this ‘Harivansh.’ The validated text that has a vivid commentary on Krishna’s Life’s social and political facets is the ‘Mahabharat.’ There is no allusion of Radha even in this Mahabharat scripture. Radha is mentioned only in the Purana (ancient text) named ‘Bramhavaivart.’ In the hierarchy of the Puranas, this particular Purana is considered to be on the lowermost rung. Therefore, it seems as if Radha has been mentioned metaphorically. The writers of ancient scriptures have given Radha an exalted place in Krishna’s life to increase the glorification of Devotional Love. Later on, it has set a precedent that the moment one utters Krishna’s name, Radha pops into the memory.

The most beautiful and most beloved of all gopis was Radha. The love of Radha and Krishna is a symbol of an eternal love affair between the devoted mortal and the Divine. Thus, Krishna has also come to be known as ‘RADHESH,’ the lord of Radha. Radha’s yearning for the union with her beloved Krishna is the soul’s longing for spiritual awakening. Radha represents the state of devotion and the consequent merging with the divine. Some scriptures also mention that Krishna always told her, ‘You, Radha are my own self.’ Hence we can look at the character of Radha and her story as a metaphor for this realization.

Was Krishna’s Life full of debauchery? No, in fact, it was the epitome of the ideal domestic life. Did Krishna marry so many thousands of women to satisfy his lust and let others burn in the fire of unfulfilled desires? Had that been the case, He would have never achieved the position of a Complete Incarnation that he has acquired in the Indian culture, which believes in the waning of desires as everything that it is based on. Krishna had married his first eight wives, namely Rukmini, Satyabhama, Jambavati, Kalindi, Bhadra, Mitravinda, Satya (Nagnajiti), Lakshmana, for political reasons, and he had taken the rest of the thousand women as wives to avoid blemishing humanity. He had freed these young women from the hellish captivity of Narkasur, but they had nowhere to go. Society would not accept them, and they would have had to lead a life of destitution. Hence Krishna set an example in front of the world by marrying them to give them an honourable reputation in society. If his life is examined thoroughly, it can be seen that how can a man who is engrossed in so many endeavours ever find leisurely time for luxuries? Krishna has shown the world through his own domestic life how an ideal husband should be. 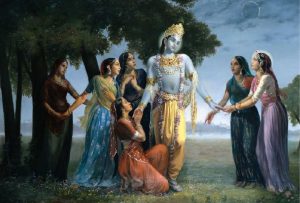 Some so-called intelligent people also make useless allegations against Krishna, such as he was lustful, a thief, effeminate and characterless. These people also state in the same breath: Krishna had indeed accomplished great deeds, but his scurrilous behaviour and his Raas Leela (Dance of Divine Love) with the Gopis of Vrajbhoomi have stigmatized his Life. In India, modesty and character are the most prized above everything else. No matter how many great feats a person has accomplished, the Indian people would still spit on his name and never give him a place of honour if he is characterless. Hence, if Krishna’s character were not chaste and indulged in lust and luxury as alleged, then today, after about five thousand years, he would not have gained a steadfast place in the hearts of the Indian populace.

Those who accuse Krishna of indulging in Raas Leela often forget that he was just seven or eight years old when Krishna performed his Raas Leela. Now think, even in this 21st century, can any child of about seven years of age be a womanizer? Has anyone even heard of any such thing happening? And how can a child of about seven years of age satisfy the sexual desires of thousands of women? That is why the minuscule wisdom of those who call and count Balkrishna as a debaucher is really laughable!! When we hear that the gopi’s were doing kreeda (playing among themselves), we make it sound like shringara, i.e., it has a sexual insinuation. None other than erotic thoughts fills our minds. (Oh yes, all looks yellow to jaundiced eyes). Those who say Krishna spent his Life indulging are all beasts, fools, and fit to be sent to a mental asylum.
Draupadi frantically prayed to Krishna when she was being disrobed in Kauravas court. Would any virtuous woman deeply devoted and loyal to her husband call upon a lustful and adulterating debaucher for help, no matter howsoever large a crisis she was engulfed in? Would Draupadi, in an extremely disgraceful situation, ever call for succour to a characterless man?
Krishna’s Raas Leela with the milkmaids of his village is not an ordinary dance; on a small scale, it really represents the universal dance of creation that, since eternity, goes on and on. It epitomizes the everlasting drama of the making and unmaking of the universe. It gives you a glimpse of that divine dance and that immense orchestra. It is for this reason that Krishna’s maharaas ceases to have a sexual connotation. Not that it prohibits any sexual interpretation, but for certain, sex has been left far behind. In reality, Krishna does not dance as a mere Krishna; he represents the male element in creation, known in Sanskrit as Purusha. And similarly, the gopis represent the entire female element, Prakriti. The maharaas represent the combined dance of Prakriti and Purusha. People who take the maharaas as a sexual representation of life are mistaken; they really don’t understand it. And I am afraid they will never understand it. To put it rightly, it is a dance of the meeting of the male and female energies, of Purusha and Prakriti. It has nothing to do with any individual man and woman; it represents the mighty cosmic dance. A gesture is the most profound medium of expression because it touches the deepest parts of man’s mind and heart. Dance reaches where words fail. 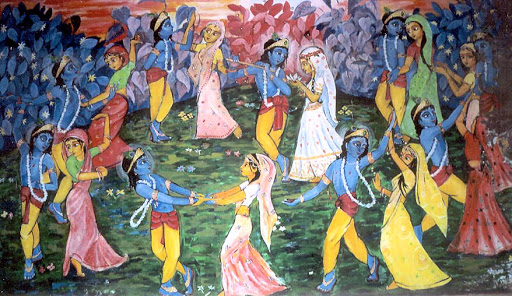 However, the abandoned woman of Gokul & Vrindavan, be it the mother, Yashoda, or the lover Radha do not judge Krishna. They don’t expect him to ask for forgiveness because there is nothing to forgive. They do not begrudge him for his ambitions, his compulsions, and his adventures. They don’t want him to turn back. They accept the nature of nature: nothing lasts forever, everything changes. They want their beloved to move on his outer journey, just as their love for him inspires them to undertake their inner journey. They are no longer dependent on him. But they will always be dependable for him. This attitude of the womenfolk is a huge impact on Krishna. He acknowledges his indebtedness to the gopikas of Gokul when despite being male, he always strikes a very female pose, the tri-bhang. This makes him the Purna-Avatar, the complete incarnation of Vishnu to walk the earth.
The significance of Ras Leela, the dance of celebration, is everlasting; it issues from the fundamental principle of life. This fundamental principle says that men and women are incomplete; they are fragments of a single whole. And they become whole and healthy only in close togetherness, in union with each other. If this togetherness happens unconditionally, it will complete the two in an extraordinary and unearthly way. On the other hand, if the union is conditional, if it has a motive, it is bound to lead to enormous difficulty and trouble in the process of its completion.
What is sexual joy at the physical level becomes ecstasy at the level of the soul. To Krishna’s mind, there is no conflict between sex and ecstasy. The joy of sex is nothing but a faint reflection, a faint trace of ecstasy, and therefore sex can become a door to ecstasy, to samadhi.
@ Yeshwant Marathe
yeshwant.marathe@gmail.com

Superb analysis of pure love and lust
While saying this and appreciating your attempt to justify Lord Krishna’s relationship with Radha, I feel that there is no need to give justification to people who are creating such controversy for getting fame and attracting attention of mass On Hindu gods anyone can create controversy as we are not much intrusive in this regards On the contrary many Hindus enjoy the jokes and such controversy which is really unfortunate All other religions never allow such controversy for their gods and even for holistic personalities