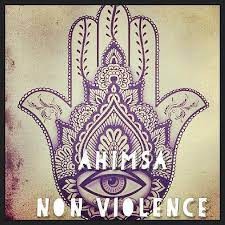 “Ahimsa Paramo Dharma” is a Sanskrit phrase quoted in Bhagavad Gita. Loosely translated, Ahimsa means Non-violence, paramo means topmost, ultimate, or supreme, and dharma means duty. Thus, the entire phrase means that non-violence is the topmost duty to the extent that it supersedes all other tasks. Someone who holds this accurate means that there is no selective application of ahimsa; it must be applied in every case and all matters. This universal sense leads to an unconditional and unilateral abandonment of violent resistance under any circumstances.
This phrase was popularised by Mahatma Gandhi and is often repeated by many leaders today to demonstrate the universality of Ahimsa. Hence, we are left to wonder how Krishna espoused this belief while goading Arjun to pick up arms against the Kaurava army. It is contradictory. 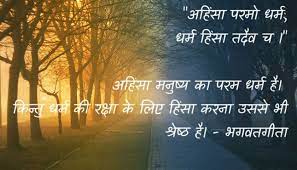 However, the statement, taken in full context and meaning as quoted in Bhagavad Gita, is:-

Non-violence is the ultimate Dharma of man. But doing violence to protect Dharma is even better than that.

Ahimsa is only loosely translated as non-violence. Unlike the English word ‘non-violence’ (which is absolute in its meaning), ahimsa means non-violence in a relative sense. There are times when violence can also be considered ahimsa if that violence is used to stop greater violence. For example, a king should always raise his rod of chastisement to keep peace and order in his country. He will fail to discharge his duty if he does not punish the wicked, and his government will be in a state of utter chaos. To hang a murderer is Ahimsa for a king. To kill a man who is taking away the lives of many is Ahimsa. Hence Sanatana Dharma did not impose total non-violence on its followers except in the case of ascetics. Ahimsa is general dharma that is superseded with himsa (violence) to protect dharma. However, one must remember that the word Dharma is not a synonym of Religion. No religions existed then.

Vidur, in his Vidur Niti, mentioned:-
कृते प्रतिकृतिं कुर्याद्विंसिते प्रतिहिंसिनम्
तत्र दोषं न पश्यामि शठे शाठ्यं समाचरेत |
Treat him the way he does. Whoever does violence to you, you also do violence to him in retaliation. There is no fault in this because there is only benefit in being strict.
Krishna had proclaimed:-

O Pandava! My promise is inevitable that I kill those who are destroyers of Dharma for the establishment of Dharma.

From the evidence of Vedadi Shastras, it was considered a virtue to kill wicked, tyrants, and demons for self-defence or the interest of the country. Never hesitate to kill a deceiver with deceit – that is, the enemy should be killed by deception. At such a time, if one is caught in the entanglement of rules and regulations, then the work will not be accomplished.

Even in Rugved (1/11/6), it is stated:-
मायाभिरिन्द्रमायिनं त्वं शुष्णमवातिर: |
O, Indra! It would be best to kill the tricksters, sinners, deceivers, and persecutors even with deceit.
Samarth Ramdas also advocated:-
ठकासी व्हावे ठक, खटासी व्हावे खट,
लौंदासि आणून भिडवावा दुसरा लौंद.
Hence, this perpetrated half-truth mentioned initially has proved to be very dangerous, especially for our country. The way this quote has been used has been extremely harmful to the ethos and pride of our country. Non-violence is maybe a correct virtue for the individual but may not be accurate for the group or society and vice versa. This is where the Fallacy of Composition comes into play. This non-violence went to such an extreme that even though Prithviraj Chauhan defeated Mohd Ghori, he set Ghori free when he surrendered. He was following the rule to protect the one who sought refuge. But later, Ghori regrouped and attacked again with more military might to defeated Chauhan. And Ghori did not waste any time in slaying Prithviraj Chauhan.
You are not only responsible when you hit others; you are also accountable when others hit you. Goodness suffers from a fundamental weakness: it wants to keep away from conflicts and wars. If a man wants to maintain peace, he needs to have the strength and ability to fight a war and win it. Everyone should have both legs intact – one for peace and another for war. If someone enters the house and molests a lady, a householder cannot keep quiet. Similarly, in a fight, a soldier cannot put down his weapons. In either case, practising ahimsa would be adharma, not dharma. A king must protect his subjects even if it requires violence to punish criminals or going to war with neighbouring kingdoms if they attack.
Krishna clearly states that ahimsa is not the highest dharma for everyone and certainly not for Arjuna on the battlefield of Kurukshetra.
Whenever we hear war, what is the first thing which comes to our mind? – Destruction. However, if we try to understand the course of development that man and his civilisation have followed, we will realise that war plays the largest share in its growth. All of man’s modern affluence, backed by scientific inventions and high technology – indeed all his achievements – basically owe their existence to war. 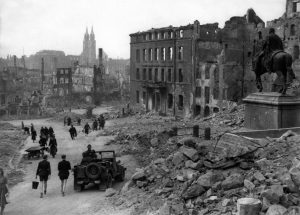 The countries that fought great wars are at the pinnacle of development and prosperity today. At the end of the First World War, people thought Germany was destroyed, debilitated for good. But in just twenty years, in the Second World War, Germany emerged as an infinitely more powerful country than the Germany of the First World War. No one could have even dreamed this country could fight another war after she was so severely beaten in the first. Seemingly, there was no possibility for Germany to go to war for hundreds of years. But just in twenty years, the miracle happened, and Germany emerged as a massive world power. Why? – because with will and vigour, this country utilised the energies released by the First World War.

At the end of the Second World War, there seemed to be no more wars in the world. But, so soon, the powers that fought it are ready for a much deadlier and dreadful war than the last. And the two countries – Germany and Japan – that suffered the worst destruction and defeat in the previous war have emerged, amazingly, as two of the most affluent countries in the world. Who can say, after visiting today’s Japan, that atom bombs fell on this country? There is another side of war that deserves consideration. A war, like the Mahabharata, does not happen in a poor and backward society; it needs riches to wage a great war. At the same time, war is necessary to create wealth and prosperity because war is a time of significant challenges.

Many people think that if Krishna had prevented the war of Mahabharata, India would have attained great affluence, she would have touched high peaks of growth and greatness. But the truth is just the opposite. If we had had a few more people of Krishna’s calibre and had fought more wars like the Mahabharata, we would have been at the pinnacle of our growth today.
We will look at how Krishna prepared Pandavas for this mother of all wars in the following article.
@ Yeshwant Marathe
yeshwant.marathe@gmail.com

Beautifully explained and elaborated!
Thanks for sharing your thoughts!🙏🏽

Very nicely explained the whole concept of “अहिंसा परमो धर्मः, धर्म हिंसा तथीव च” | This second part was conveniently omitted from the narratives of all the political leaders.
The great wars reminded of the last battle of Panipat. Your theory applies here also,

Which means a certain Mahatma was being “factually inaccurate” when he used a half quote to bolster his thesis of stupid and senseless non violence!