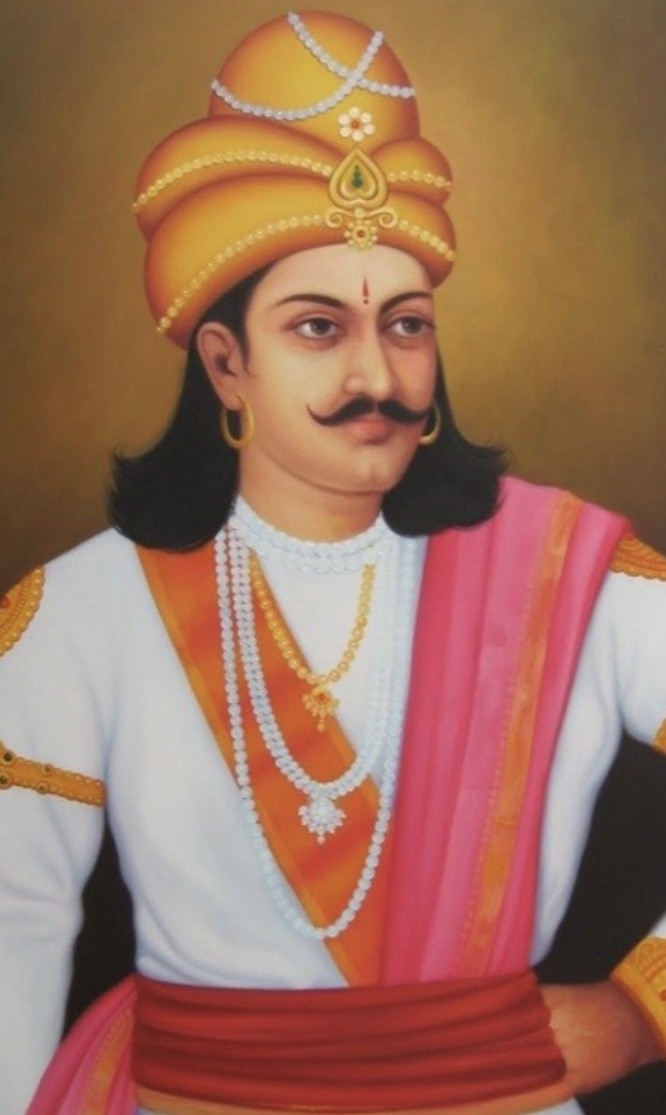 From 600 CE, the Arabs started invading Middle East and Central Asia and conquered Syria, Iran and Spain. Mohd Bin Qasim, the nephew & son-in-law of the ruler, attacked the Sindh Province and defeated the Hindu king, Raja Dahir in 712 CE. Buoyed by the success, he went on a rampage and came all the way to Gujrat & Rajasthan by capturing Jaisalmer, Marwar, Mandalgadh & Bharuch.

We hardly know anything about what really happened in north western frontier for next 300 years, till the arrival of great plunderer, Mahmud Ghazni.

Here the valor and legend of Bappa Rawal, the King of Mewar, reveals the true history.

Bappa Rawal was a celebrated King of Mewar region in Rajasthan & established the Mewar Kingdom and famous Eklingiji Temple in 728 CE. His original name was Raja Kalbhoj (कालभोज).

He commandeered confederation of Rajput kingdoms to decimate the Arabs, led by Mohd Bin Qasim, and chased his army into the deep desert beyond Ghazni. Most of the Arab were killed in this battle; such was the ferocity and military power.

Bappa Rawal in a sense had broken the myth that Indian Kings could not unite against foreign invaders to protect the motherland. We have always heard the exact opposite narrative in our history books. The ferocity and bravery of Bappa Rawal was so astounding that people addressed him, the name of reverence, Bappa. (बप्पा, मेवाड़ का संस्थापक पिता)

He was a Visionary Commander as he realised that invaders are not be decimated within the borders of India alone but to be demolished in their homeland as well. To strengthen the north western frontier, Bappa Rawal built a city named Rawalpindi, still surviving after his name. The city was strategically located and hence made his military garrison.

After strengthening the post of Rawalpindi, Bappa Rawal led 16 valiant forays into Ghazni (Afghanistan) and subjugated the entire Ghazni. Bappa Rawal expanded the kingdom of Mewar boundary on a vast geographical area deep into central Asia as well. His successful military expedition into Sindh, Balochistan, Ghazni, Kandahar Khorasan, Turan, Isfahan & Iran to establish him as one of the greatest kings of contemporary world.

Such was his power and fear that he could command & administer the entire north western frontier from Mewar. Arabs gave up the idea of any military expedition to the prosperous land of India, for next 300 years.

We have always been taught that Afghans were undefeated warriors. But the fact that Indian Kings like Bappa Rawal defeated, subjugated and ruled Ghazni for a long period.

Bappa Rawal who assumed the honour of being the saviour of Chittour at the mere age of 20, ruled for next 30 year. He took the spiritual path thereafter & submerged into the devotion of Lord Shiv in 753 CE.

Rana Sanga, Maharana Pratap and Rana Uday Singh were among his descendants.

Hence it is possible that the name of the city he established was Rawal Pind (रावळ पिंड), being a Shiv Bhakt, which later became Rawalpindi.

PS: Pind means Village in Punjabi. Hence it must be Rawal Pind only (a village built or established by Rawal).

Great! Such History is never taught to us! Shame on previous governments.

Yash, what I strongly feel that you further work hard on these historical facts which are with evidences to prove your point of view. And publish the same. We all will persue a govt. EDUCATION DEPARTMENT TO HAVE IT IN SYLLABUS AS SEPERATE SUBJECT ‘UNKNOWN FACTS OF INDIAN HISTORY’
OR MAY BE IN FORM OF ‘ RAPPID READER’
COLLECTION OF HISTTORICAL FACTS…….
Just thinkover, have opinion of your friends, professionals and history experts.
It’s just a thought, idea – whatever you call but if it happens your name will be there in India or Maharashtra history.
This you may find impractical or rather emotional but this is need of the time for our young generation.
All the best.
Ashok